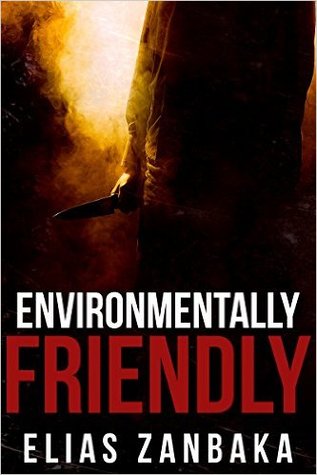 Why this story?: It sounded interesting and it was short. Also, waging war on Mother Nature seemed REALLY cool.

I would like to thank the author Elias Zanbaka for providing an e-copy of this story in exchange for an honest review.

My biggest problem with Environmentally Friendly was probably the where the narrative was situated in the story. Zanbaka attempted to fit a novel length story into the length of a short story, and it dramatically altered the story. I found myself questioning what was going on, as well as the actions of the characters. Why did Sergeant Schaefer want to help Major Bushnell? Why did Bushnell want to wage war against Mother Nature. I feel like more was explained to me about the story by the author than what I got from the actual story. There was so much missing information that made the story more confusing than intriguing.

I also struggled with Zanbaka’s writing style. There were more combinations of random adjectives and verbs than actual descriptions of the events. There were moments when they would be in the alley and run up the stairs, but then all of a sudden they were speaking to the officers behind them, even though nothing was said about the officers following up the stairs. It was impossible for me to follow what Zanbaka was writing, which only added to my confusion in the beginning to what was happening.

As well as being confused for the most part while reading this one, there was also an instant where Schaefer and someone named Silas Hazzard were having a conversation, and called Major Bushnell not only an animal but belonging in a nuthouse. Referring to a mentally ill person as an animal and belonging in a nuthouse was a very offensive way to put it, and was never challenged. In fact, one line was said by Hazzard, and the other was said by Shaefer, who was supposed to be defending Bushnell.

The idea was good, but it was the execution that ruined it. Zanbaka had an interesting idea, and only partially executed it, and what was executed could have been done better.

It really depends. It could be a “it’s not you, it’s me” moment. Either way, if you’re looking for something that’s quick and easy, you could try this one. It’s a quick read, with easy enough language, so it’s really up to you.

Out of seven billion people, one man has declared war on Mother Nature and plans to bring it to its knees.

Out of all the criminals in Los Angeles, he’s the number one target being hunted by the LAPD tonight.

And out of the entire LAPD, one officer is hell-bent on helping him complete his mission.