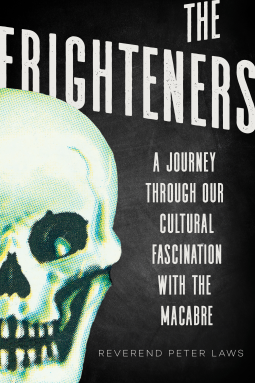 Reverend Peter Laws went from being a horror obsessed atheist to a God-fearing Christian, only to turn back to his macabre fascination with the realization that loving the horror genre doesn’t mean he condones it. Instead, he decides to discuss, and hopefully help others who struggle with their love of horror.

Why this book?: It was an interesting topic, and I wanted to read more non-fiction!

I would like to thank the people at Skyhorse Publishing for allowing me to have a copy of this book via NetGalley in exchange for an honest review.

Being someone who’s favorite character in books was almost always the villains, being someone who enjoyed watching true crime documentaries because of how fascinating they were, and being someone who was always interested in the idea of ghosts and paranormal stories, I have to admit that this novel was definitely up my alley. I wanted to know more about why people were fascinated with these gruesome ideas and events, and so seeing this book definitely caught my interest.

But I can’t say that it really kept my interest.

When I opened this book, I was expecting a thorough discussion and presentation of evidence on the subject, and, eventually, I did get that. This discussion, though, didn’t happen until after Laws told a story about his life that happened to line up with the subject of the chapter. It was a fairly odd way to talk about this subject, because it was very casual up front, and then twenty pages later he would begin to present evidence in the way I was originally expecting, with professionalism, while still staying conversational. So with each chapter, Laws would go back and forth, back and forth, going from casual and funny, to professional yet conversational, and it was just weird, and these two types of prose clashed. I couldn’t get into the novel because of the constant switching.

Beside Laws’s strange writing style, I also wasn’t sure of some of the topics. Some of them were truly fascinating and had me engrossed, like the murderabilia chapter and the vampires and werewolves and the discussion on violent video games. However, some of the other topics were just unnecessary. That chapter on furries? How does that relate to the horror genre? Or how does a tour of Romania constitute as something that would be connected to the topic, other than the fact that the whole vampire lore was based in Romania. Some parts of the novel just seemed there to increase length or go into really niche subjects that weren’t important. I still honestly can’t get over that furry chapter. He had literally gone to a furry convention to…what?

Peter Laws wrote a very solid and interesting novel. He kept me reading out of interest, but honestly my main reason was out of review obligation. It was an interesting book, I’ll give him that, but the weird type of writing, going back and forth from casual to professional, as well as the unnecessary chapters about subjects that didn’t matter.

Maybe! I don’t know if there are other books on a similar or same subject, but this one was just okay. I would be interested in reading other books, but I do think that this one was a good place to start.

The Frighteners is a bizarrely compelling, laugh-out-loud exploration of societies’ fascination with the dark, spooky, and downright terrifying side of life. The author–self proclaimed “sinister minister”–opens the book by reflecting on how he went from a horror-obsessed atheist to a God-fearing Christian and then reconciled his love of the macabre with his new faith. In the chapters that follow, Laws takes us on a worldwide romp to shine light on the dark corners of our own minds. An American hell house–controversial Christian “haunted houses” that act out the horrors of abortion, drug use, etc.—hosts his reflection on the use of horror in religion. A party in London with real life “vampires” exemplifies modern sexual fascination with the parasitic undead. He goes ghost hunting in an underground barbershop where a murderer used to cut hair. A professor in Denmark who is an expert on the recent Slenderman court case helps him explore the link between technology and the supernatural.

In accessible and light-hearted prose, Peter Laws takes us from the dark corners of his mind to the underbelly of various macabre cultures to illuminate society’s preoccupation with death and horror. The Frighteners combines psychology, religious theory, and personal memoir to create a dynamic and fascinating read that is informative and entertaining.

2 thoughts on “Review #178 // The Frighteners: A Journey Through Our Cultural Fascination with the Macabre – Peter Laws”