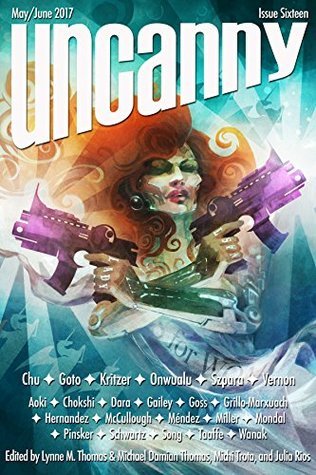 n a world where vampires co-exist with humans, one has to go through specific channels if they want to become one. One requirement is that you can’t be transgender or gender non-conforming due to how it will change your body. When Finley is bit without consent, his life changes in unexpected ways.

Why this book?: I was looking for queer horror and this was recommended to me. It’s not exactly “horror”, more like supernatural, but it was still really good.

I have a few complicated feelings about this short story, not because I didn’t like it, but because I had no content warnings going in, and this was a fairly…graphic? story. There are explicit sex scenes which I weren’t expecting, as well as scenes with gender dysphoria. It was unexpected going in, but it wasn’t a bad story.

We won’t go into that for now, because overall, I really did enjoy this story. It was creative and diverse, and I really loved how Szpara developed the characters and the world around them. I really related to Finley’s experiences and his temperament, which I honestly found hilarious as well. There was a discussion on consent that I enjoyed, because this whole story only happens when Andreas, the other protagonist, violates Finley. I’ll repeat that: Andreas, also the love interest, starts off their relationship by attacking Finley in an alley. After that first interaction, everything is consensual, but I figured I would warn for that first bit as well.

It was interesting to see how Szpara decided to have vampirism interact with trans individuals. It was definitely disturbing to read from Finley’s POV, I could literally feel their panic, and with how it interacted with their chest surgery. I also really enjoyed how they ended up figuring it out, even though they left it off at a cliff hanger of sorts. These are the scenes with a lot of gender dysphoria.

Small Changes Over Long Periods of Time is a unique story that was definitely not what I was expecting. There were a few triggering things that should have been warned for that weren’t, but, like I said, it was overall enjoyable and I’m interested in reading more of Szpara’s work.

Sure, with warnings of course. I mentioned earlier about the gender dysphoria and explicit sex, as well as the opening scene being a non-consensual “attack”. It’s been a bit since I read this story, so I may be missing a few warnings, so let me know if you know that I missed something.

Jaded trans guy, Finley Hall, reckons with society—and his own body—when a vampire bites him, leaving him to choose between death or a second transition. Blood, hormones, and queer sex. Bodies and identity.